TV21 ( Playing With Fire and On The Run Singles) 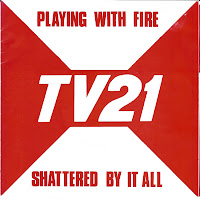 Per request, new rips and scans; these two singles were originally posted separately in 9/16/08 and 6/17/09.
For your listening pleasure, here's my favorite TV21 records, with "On The Run" being my favorite of the two. The B side, "End Of A Dream" is still to this day one of my favorite songs. I added a bonus song, "Ambition" from the free single that came with "Snakes and Ladders" to the "Playing With Fire Single" download. Ambition was also part of a three song Ep released on Powbeat Records in 1980.
TV21 were a four piece from Edinburgh Scotland, that formed in 1979. The bands name comes from a weekly British children's comic from the latter part of the 60's. They recorded a number of singles and an LP before parting ways in 1982. In 2005 they reformed and released a second LP titled Forever 22; if interested you can pick it up Here. A couple of years back, Cherry Red released an almost complete discography you can pick up Here. TV21 has a Myspace for you to check out as well, Enjoy! 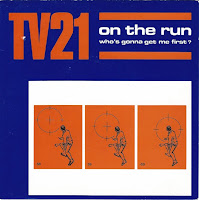 Hi Frank,
Thanks for the kind words about On The Run. It was a song we were always proud of though being stubborn young men didn't put it on A Thin Red Line.

We still close our gigs with it even now and decided to record it again for the new album Forever 22. We'd never been truly satisfied with the previous version.

Thanks for the TV21 stuff Frank, I used to own these but can't find them anywhere. I can give up looking now.

Top notch record from an equally top notch band. Love everything they did. A Thin Red Line would easily be in my top 10 of all time.
I hope one day to see it re-released on CD with all those delicious singles and B-sides!
Thanks,
Steve
Australia

I saw this group suppoerting The Understones at The Hammersmith Palais in 81 I think. They went down a storm and I bought their Deram singles on the strength of that gig.

Thanks for the comment Charlie. I'll bet they were, and still are a great live band.You were lucky to have seen them.I believe There is some cool footage of them live on Utube.

how are you?
Can you please repost TV21's singles?
Thank you very much
Efstathiou Stathis

No Problem, I'll need some time though.

Thanks Frank ... very much appreciated!

Your welcome, glad you like the records. Thanks for the comments Gary and Doug, they're much appreciated!