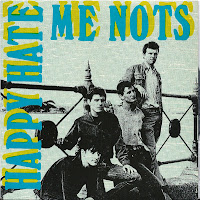 (per request repost of it won't do any good, 2/15/2009, and your an angel, 6/10/2010, new rips, and scans I added a third single, soul rejection to the post enjoy!)
The ‘Hate Me Nots were a Sydney, Australia four piece that formed in 1983.The first line up featured Paul Berwick (vocals/gtr), Tim McKay (gtr), Peter Lennon (bass/vocals) and Neil Toddie (drums). This line up played some 20 odd gigs, planting the band’s flag on the map. Neil Toddie then left in 1984.
Mark Nicholson then came in on drums to complete the second line up. In 1986, Mark and Peter Lennon both left. They were replaced by Mick Searson (drums) and Chris Houllemare (bass), to complete the third line up.
The first publicly released recordings appeared on an Aberrant records compilation, NOT SO HUMDRUM, in 1984, recorded by the band’s second line up. This album contained two tracks – When The Chips Are Down and The Build Up.
This line up also recorded two singles, released via the Waterfront Records Label Wont Do Any Good and You’re An Angel (both in 1985).
Between 1986 and 1991 the third line up had a string of releases via the Waterfront Records Label. In total, these included 5 singles - Salt Sour and Brighton, Don’t Move Too Far, Soul Rejection, Something and I Could See It Coming), an album Out, and two mini LPs Scrap and A Place To Live. This info came from their official website . Go check it out !

♪♪♪ It Won't Do Any Good ♪♪♪
♪♪♪ You're An Angel ♪♪♪
♪♪♪ Soul Rejection ♪♪♪

back to the oldies said...

have a nice day

You're welcome, glad you enjoyed it!

thanks mate..
Tim was my twin brother.
John

great stuff Frank.....i found their SCRAP EP here in Boston when it came out, and was on holiday in Sydney in 1988 when their only full length LP "OUT" came out and they were awesome live....shame they couldn't make it it to the USA in that era...jim

back to the oldies said...

hi franck
I hope you're well
Do you stop the blog ?

I have post many requests and you wrote that it will be done soon...

Thanks for your answer

Thanks for the comment Jim, wish I could have seen them!

The Spelling Mistakes Ep is comming soon. Thanks for the request, and your intrest!