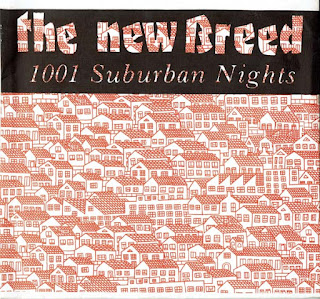 The New Breed were a New Jersey four piece, around in the mid 80's. The contact address on the sleeve is Paramus. Far as I know, this was their only record as The New Breed. A couple years later, another single titled "Teenage Myth" was released under Dennis Michell and the new breed. The band members were the same, minus Tony Romano. A few years later, a cassette was released under Dennis Mitchell and The Wilsons.

Dennis Mitchell - Guitar and Vocals
Tony Romano - Guitar and Vocals
Chris Labianca - Bass and Vocals
Jimmy Russell - Drums
Absolute Records - 1984
1. 1001 Suburban Nights
2. Blessings In Disguise
3. Get Yourself Together
4. Place In My Mind
♫♫►►I Look In The Mirror and a Year Goes By◄◄♫♫
Posted by Frank Miller