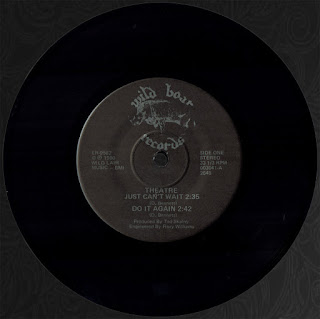 Theatre were a Chicago four piece, around from 1978 to 1982. Besides this EP, they released a full length titled, " Diamonds" in 1981. Not sure if this is true but I stumbled on a ebay listing that claimed...Some tracks were recorded in upstate NY, while on their way back from a tour. The producer took these four and pressed 100 copies, of which 25 were circulated without the bands knowledge. At any rate, someone believed story, they paid $588.00.. One things certain, " Any time at all" is a great slice of Powerpop!