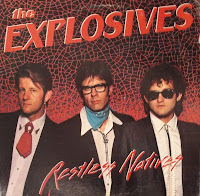 Sorry I haven't posted much lately. I literally have stacks of singles, and Lp's waiting to be posted, but For some reason I just haven't been that into it. Anyway, enough of my whining. Here's a great Powerpop LP to cheer me up from Austin, Texas's The Explosives. I only recorded five songs. Never be good for you, and I thought you were a man, are my faves here. The Explosives were around from the late 70's, till shortly after this was released. They also had a few singles, and a couple of tracks on the Live at Raul's album.I believe the bands active again in some form. There's more in depth information You can find on their Myspace. They also have a couple of Cd's that together have all, or most of the bands recorded output. You can find them HERE , and HERE .
.
Ready Go Records 1982
.
***DOWNLOAD***
Posted by Frank Miller

The Explosives started out as Roky Erickson's backing band, touring extensively in the California in the late 70s. They also toured without Rocky, and released this LP.

I was aware of that, thanks for the info. When there's a website that people can check out themselves, I've been trying to cut down on the size of my post's.

Why only five songs out of the eight?
It's a real pity.
POPPHIL

I didn't post the rest of the record, because I didn't think it was that good. Phil, If you really want to hear it that bad, I could record it for you. That's my problem with LP's. So few are worth posting in there entirety.I have so many cool Lp's that have one, maybe two great songs, and the rest just does nothing for me.I'd like to post them, but I don't feel like sitting through recording the rest of the records.

Thanks for your answer.
Do you know if the three missing songs have been re-issued on the 'Ka Boom' CD released not long ago?
Keep the amazing job up.
POPPHIL

Hello,
can you please repost this LP?
Thank you very much
Stathis