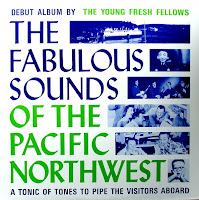 The Young Fresh Fellows formed around 1981 in Seattle Washington. Their Myspace claims this record was first released as a cassette in 1981, with a limited edition of 25 copies??? I'm not sure if that's true or not. If so, it took them three years to release it on vinyl. These guys have a good sense of humor, play great 60's inspired Pop, and have many releases to their credit. If your interested in learning more about them, this Wikipedia page is a pretty good page to start.
.
Popllama Products 1984
.
***DOWNLOAD***
Posted by Frank Miller

Wow! Where did this come from? Love it Frank - took me back to the '60s, but better than I remember it!

Thanks for the comments Graeme, glad you liked the records.

Thank you very much.

25 copies on cassette? they are the best.

Thanks for the record. Greetings.

Your welcome, thanks for the comments !

The Fellows frequently played at my college back in the '80s. They even did an ELP cover!